In contrast to last weeks glorious sun, this week has been rain, rain and yet more rain. Worse still, there’s been a blizzard in the kitchen, not actual snow you understand, but off-cuts of foam insulation floating down from the ceiling, sticking to every-single-surface possible on their journey. The insulation will though, really help on our energy efficiency and is quite a big tick on our to do list. 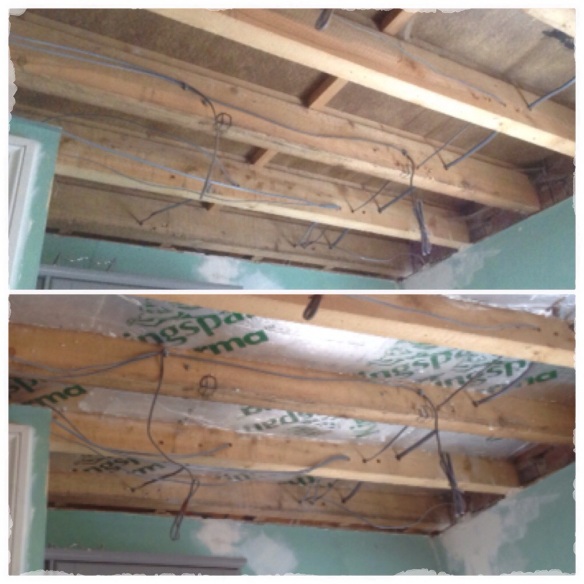 The plumbers will need access to the beams to run the central heating pipes through, but once that’s done, we can have our ceiling back, won’t that be a luxury! While Ronnie was beavering away in the kitchen, I set about trying to smarten up the corbels in the hallway. Whilst ridding the hall of the last traces of wallpaper last week, I noticed the steam seemed to be affecting the paint on the plaster corbels, this, was a complete bonus as the steam technique I’d read about failed miserably on the ceiling roses. This picture shows how the steam melted the paint and allowed me to peel back decades of paint. 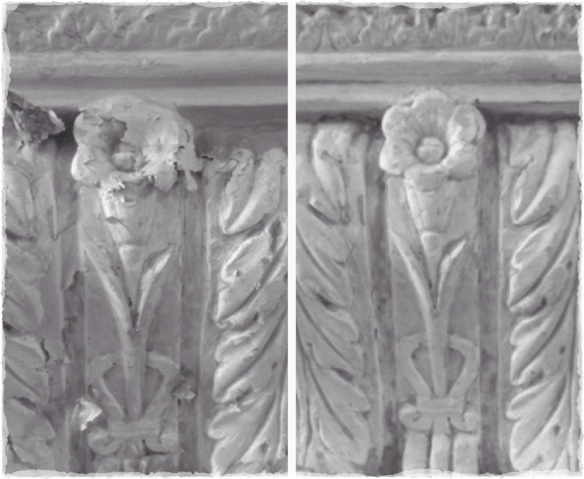 The left hand corbel has suffered a few knocks over the years, but they are both in quite good condition all things considered. 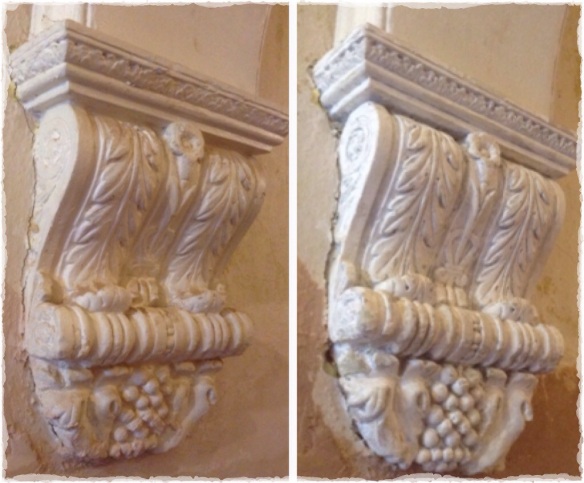 This before and after shows how much crisper the corbels are now, especially noticeable on the top frieze and the ‘grapes’ – hurrah!
In other news, we have confirmed a plasterer, who will start bright and early next Saturday, (and as he’s someone Ronnie has worked with, I think he’ll actually arrive!) first up will be the lounge, so we’ve moved most of the furniture out to the library, which now resembles a bring & buy sale. The chimney rebuilding quotes are in, the first was 80% over budget, the second? 30% under budget, go figure! However, after a bit of a deal we’ve done on separate scaffolding, we should be able to get this job priced right down. Last but not least, we’ve put a bucket in the attic under a hole in the roof, so hopefully that’s the last of blizzards in the kitchen and rain on the landing for a while!