Oops, missed a week. We’ve both been in the sick bay with a bug, so progress has been slow… We’re recovered now, so full steam ahead, phew!

We’ve been given this lovely little sofa after eagle-eyed June spotted a neighbour throwing it out… It’s now on my ever-growing list of things to up-cycle. Sweet, isn’t she?

Last Saturday Ronnie and I ventured into the village for some breakfast, when we returned the workmen mentioned Ronnie’s friend had been round to borrow his electrical saw from the shed, we’d not been expecting anyone so after a quick ring round, we decided that the saw had been stolen by an opportunist, which was pretty much what we deserved for leaving the shed open with valuables inside. Oh well.
The kitchen fitting is almost, very nearly complete. It took the fitter quite a lot longer than he anticipated but we’re really pleased with the results so far.

These pictures show where the two walls have come down, the first just behind the new breakfast bar, the second came off the yellow wall in the background. The stained glass window I bought will drop into that yellow wall one if these days!

The breakfast bar has achieved the divide we wanted between kitchen and dining areas, we still need to get the extraction hood fitted. I’m still upset I missed out on those old school stools on Ebay, they would have been perfect! The exposed brick wall can be seen in this picture too, sooooo many hours of scrubbing, but it’s looking good! 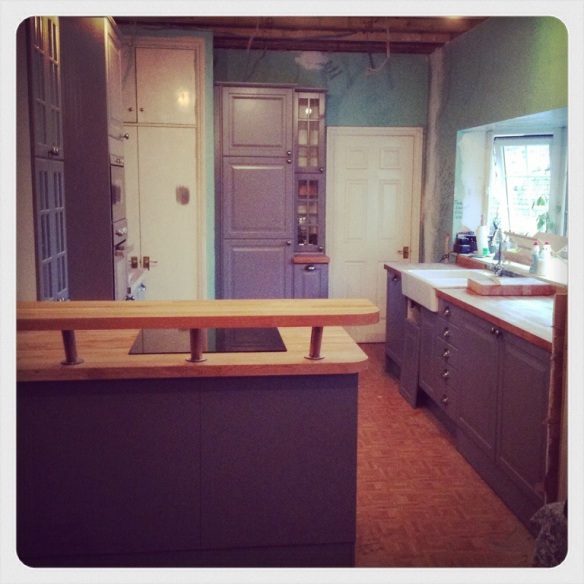 The oven and microwave sit just got the right of the hob. 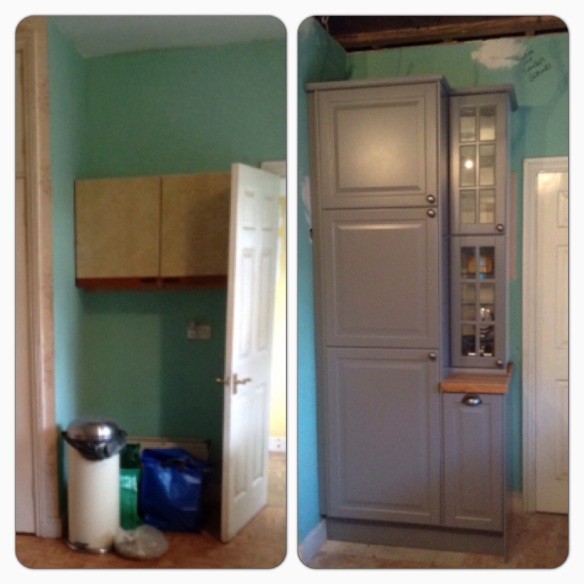 The corner by the pantry has worked out ok, and now houses the fridge freezer and some cupboards, next weekend I plan to sort out the cupboard doors…new hardware, beading and a good few coats of paint. Dottie cat has been ‘helping’ in the kitchen by sitting in the box of handles, refusing to move.

Finally for this week, the ‘stolen’ saw was returned. A red faced couple knocked at the door and basically they’d arranged to borrow some tools from a friend of a friend and gone to the wrong house, they only realised when they returned it! All’s well that ends well, they bought us some wine and chocolate to apologise, and the saw made a lovely job of their new kitchen floor!

8 thoughts on “A kitchen, a sofa and a robbery that wasn’t.”