These long weekends are giving us a much needed progress boost.

The lounge isn’t too far off, the floor needs one last round of sanding and varnishing then it’s finally done…We’ll get this sorted in the evenings during the course of the week.

There’s not too much else we can do now in the lounge until the fire is fitted over the next couple of weeks, one task we still needed to do was to make the opening of the mantle piece slightly smaller to avoid a gap between the backplate of the fire once fitted, it’s not an ideal solution as we’d rather not tinker with the mantle piece, but there’s little else that can be done as it’s such a large opening.

Ronnie attached some decorative profile oak skirting board to the back of the mantle, it actually blends in quite well and once it’s waxed it should look good.

While the latest coat of floor varnish was drying we worked on other areas of the house to avoid smudging the finish, though the trail of dinky little paw prints meandering across the gloss suggests Dottie didn’t get the memo. We had a huge clear out from two of the spare rooms in the extension, we plan to get these rooms done quite soon as there’s really only decorating to do as walls and ceilings are sound.

We busied ourselves doing mist coats on the landing and large guest bedroom,  even though it’s very rough it looks so much more ‘finished’ than bare plaster!

I’ve also done a bit of homework on finding somewhere to get the doors dipped, it’s looking likely to cost around £20 each which was a pleasant surprise, we may as well get them all done at once.

The cloakroom got a last coat of paint, it’s now ready and waiting for the photos to go on the wall, followed by towel rail, which will hopefully be done next weekend. 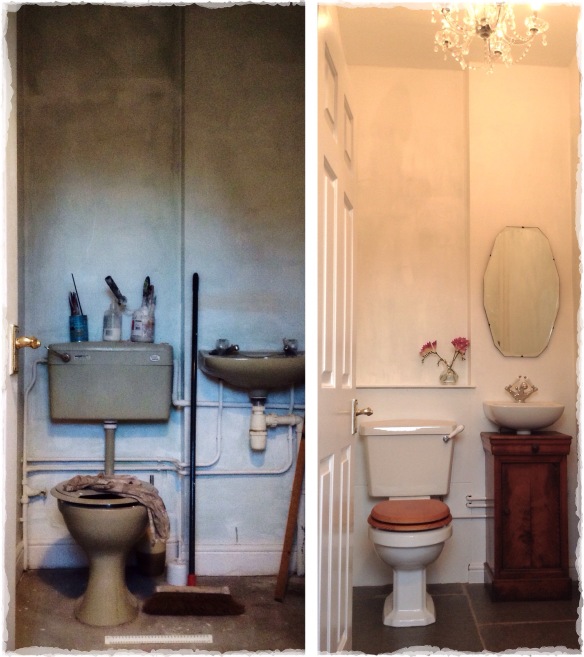 While hunting round for my bathroom accessories in the attic I finally remembered to hang up the Christmas mistletoe, it apparently brings good luck to a house, I’m not sure it still works if you forget to do it for five months but it’s worth a try, we need all the help we can get! Oh and the bathroom accessories? I found those in the bedroom.

As the weather was quite nice, I decided I’d sort out the herb pots for half an hour. Five hours later, I’d dug out two bushes, planted more tomatoes, hydrangea & sunflowers, tidied the herbs and rehomed them outside the kitchen door on their own inpromptu wall. Roland if you are reading you better be impressed!

The whole of the courtyard is now looking good, soon the rose will be flowering as it was the day we first viewed the house. The rest of the garden is going a bit, erm…wild, but one thing at a time…I’m going to turn my chair around and enjoy a glass of wine in the nice bit!